Things don’t always turn out the way I want. Take, for example, this year’s Halloween costume, which I ordered from Wholesale Halloween Costumes on-line, and which was supposed to be a 70′s disco girl dress, headband and necklace.  Instead, THIS is what arrived yesterday afternoon in a huge cardboard box ["Amado: What the hell is in that box, anyway? What did you order?"] 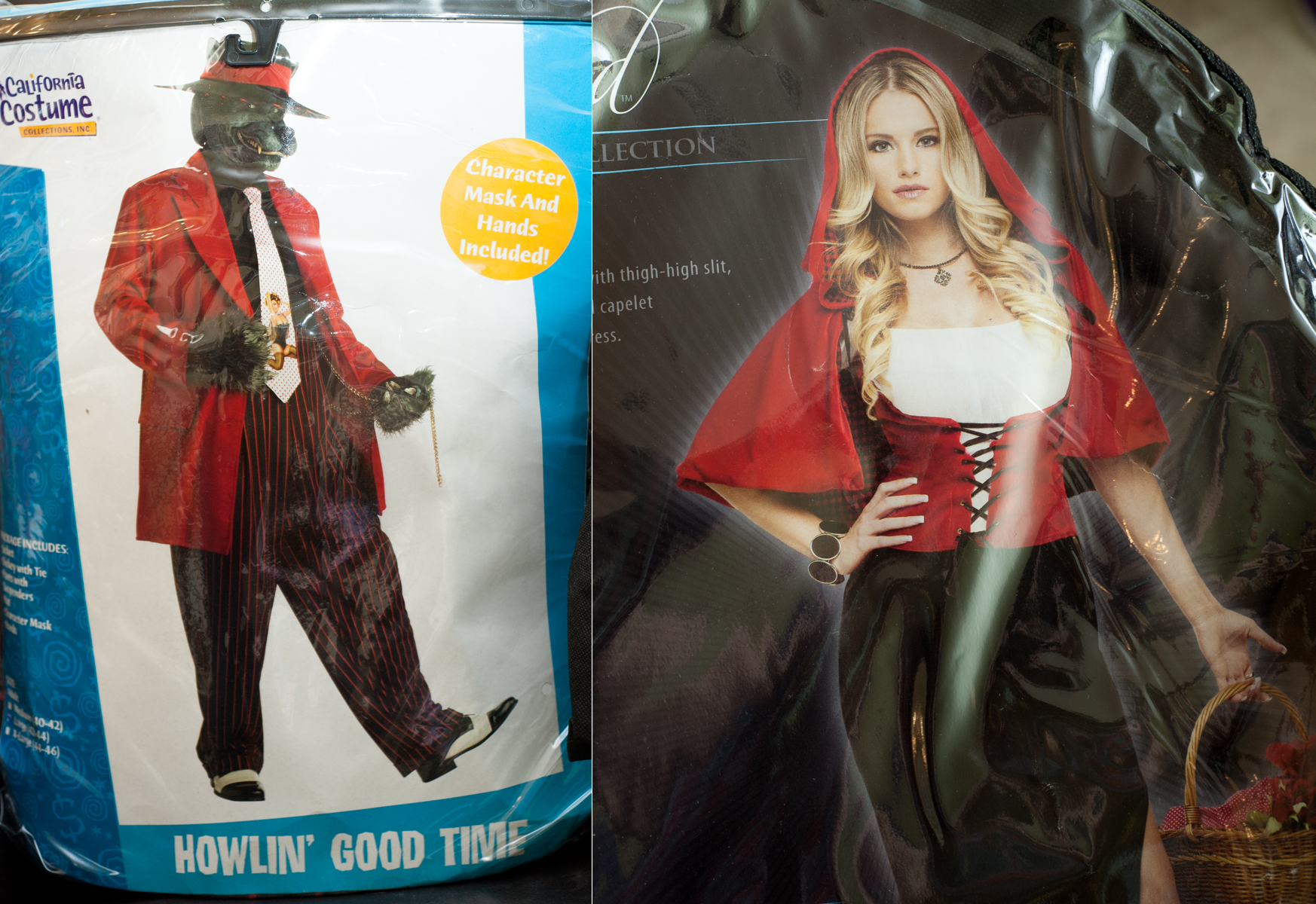 “Hmmmm….” I said thoughtfully, as neither one of these special suits even marginally resembled the one I’d ordered.  I held up the wolf.  “Aaaaoooooo!” I wailed to the general area.  “AWhoooooooooo’s ready for Halloweeeeeeeeen!”

“Mama, what IS that!” Isabel was half-laughing, half-alarmed.

“Well, this is NOT what I ordered!”  I explained, dangling it in front of my husband, who was busy working at his computer and not really paying attention.

“Yes, Sweetie!” I agreed. “It DOES remind me of the Catrin, too. Probably because this wolf is such a dandy-man!”

“Hey, Amado!” I urged. “Do you want to be a Lobo Catrin for Halloween?”

Amado was not interested in this excellent idea. “No,” he said.

“I’m just kidding,” I explained.  “Besides, this is not really mine, anyway. I’m going to have to send it back.”  I pulled out the packing slip from inside the box. “This was SUPPOSED to be sent to….Gregory Scott. In Larkspur, Colorado. But they put it inside a box marked Jennifer Valencia. Nice.”

“I guess they go together,” I observed to Amado.  “Poor Gregory Scott. He and his girl probably need these for a weekend party, and they never arrived. And I don’t even want to think about what they had planned for later on, that they now have to postpone.” [Too late, BTW - role-playing image stuck firmly in my mind.]

“I guess I’ll call the company,” I said, and here is how that conversation went:

Me: Hello!  The wrong costume was sent to my house in Phoenix.  Your store sent me a Howlin Good Times Wolf and a Sexy Riding Hood, and I was really supposed to get a 70′s girl.

Guy: So you didn’t order the Howlin Good Times Wolf?

Guy: That’s on the way. And who was supposed to get the Howling Good Times?

Me: Some person named Gregory Scott. But he lives in Larkspur, Colorado.

Guy:  Uh, does he live near you? Like, maybe you could drop if off at his house if you are neighbors?

Guy: So you didn’t order the Wolf.

Guy: And you don’t want to keep the wolf.

Guy:  But do you know Gregory Scott? Is he, like, a friend?

Me: No! I just got his name from the packing slip.

Guy: Ok. And he’s not, like, someone you know? Because, I’m, like, trying to figure out how this happened.

Me: No. I do NOT KNOW GREGORY SCOTT.  Someone at your store put the wrong order in my box.

Me: You should probably contact Gregory Scott and let him know that you accidentally sent his costumes to the wrong place. He probably needed them this weekend. And I noticed on the box that it was sent express. He’s going to be disappointed.

Guy: Yeah, that’s a good idea!  OK, I’ll put a note here to have someone do that.

Guy: So, can you, like, send Howlin Good back to us? And Sexy Red? Just, you know, go to the website and print out the special return form, but be sure to print out the ones that apply to that style and brand of costume, and then you just affix it to the box but be sure to also include the order number and the return number, which you will get from another part of the website, and then take it to the post office?

Isabel danced around the costumes in their big cardboard box. “Mama,” she observed helpfully, “You can’t wear that Riding Hood one.”

“That’s true, Sweetie,” I replied, googling “Gregory Scott Larkspur CO” to see if I could find his phone number, because I was pretty sure that Costume Wholesale was going to fuck up any communication with him, and don’t global neighbors help one another out now and then with a friendly informative phone call?

“Because,” Isabel persisted, “It’s too small for you, Mama.”

“It’s, like WAY too small for you, Mama!” Isabel continued. She warmed to her topic. “It’s made for a lady HALF OF YOUR SIZE, MAMA!”

Isabel was eager to demonstrate just how much smaller. She ran up to me and drew a line down the middle of my chest with the side of her hand.  “See, Mama? The costume is for a lady who is like THIS half of you, just the half part, Mama. Much smaller. See? See, Mama? See?” She looked up at me eagerly, eyes bright, happy to be so observant and helpful.

“Yes! Got it! I DO see! Thanks, Honey!” I said, because how can you not be charmed by a small sweet girl with a disarming smile and sparkling eyes, no matter what she says? She does have a point.   And hey, silver lining alert! –  Good reminder to stay away from the Oreos and keep on going to CrossFit!

So things didn’t go as I planned with the costume, but obviously things are going even worse for Mr. Scott and his little lady (size 4-6), because at least I can get some laughs out of the mistake, and all he is getting is rage (probably) and a cheaply made replacement costume from Spirit Superstore. But maybe he’ll laugh about it later.

So…awhoooooooo’s ready with THEIR costume?

P.S. – Couldn’t find phone number for Mr. Scott, at least not free number. Since when does the White Pages charge you for a phone number? Was I doing it wrong? Sorry, Mr. S., calling you is not worth the $10 is would cost to also get your criminal record and address history, and frankly, I’m not “that” good a global  citizen.

P.P.S. – So if anyone reading this happens to know Mr. Scott in Larkspur, CO, please tell him what happened to his costume.