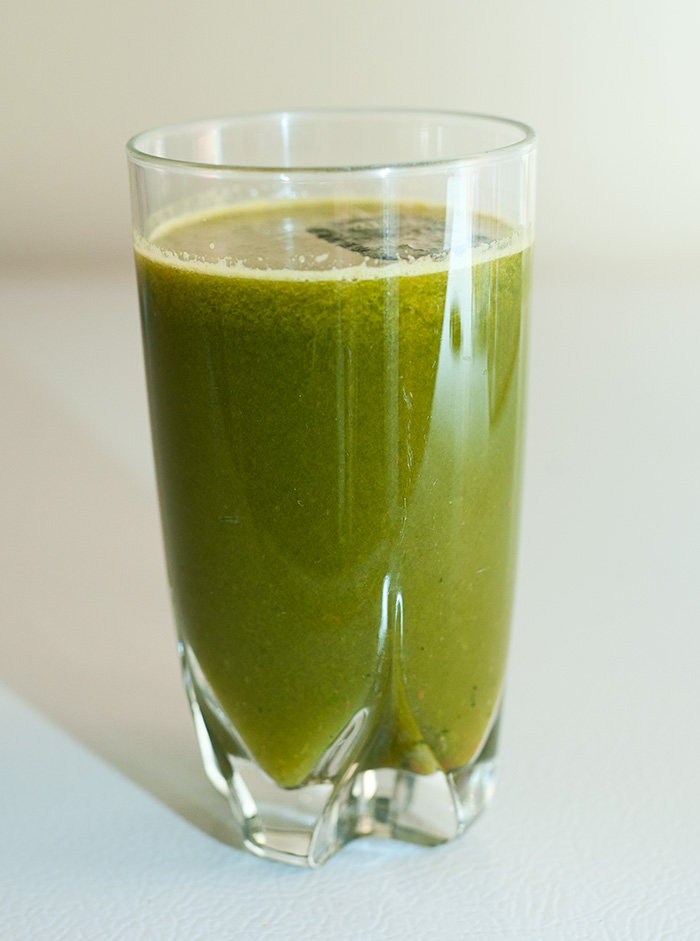 Use the following ORGANIC ingredients for the “Mean Green”

Sometimes I put in beets, although lately I’ve been keeping the juice green.

I have an Omega juicer. It’s a slow juicer, which means that it uses an auger-like drill to squeeze the veggies and fruits apart, and it’s capable of handling pretty much anything – including wheat grass.  It’s also SLOW in that it works slowly, and the veggies must be chopped into very small pieces, almost as if you are preparing them for a stew — otherwise the juicer will seize up and you’ll have to clear it out. 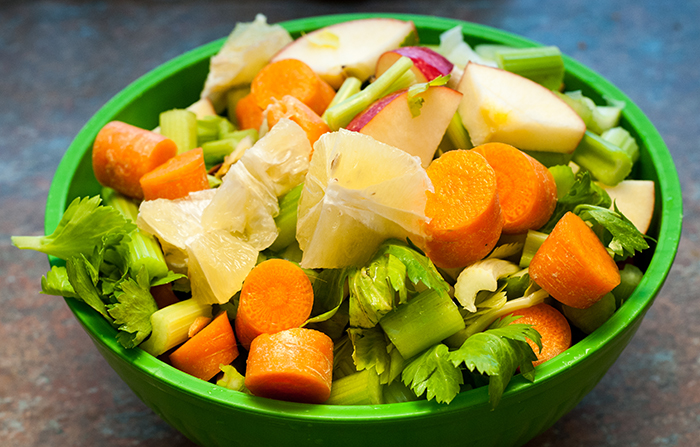 This can get annoying when I’m in a hurry, but the juice is delicious.  Proponents of slow juicers claim that there are more nutrients in slow juice because it oxides less during preparation.  (The other main kind of juicer – and the more affordable version – is the centrifugal variety, which spins the fruits at high speeds through a metal grate to juice them.)  I don’t know whether this has  been scientifically tested or whether it’s just a manufacturer’s claim, but I like the flavor of the juice and the fact that it can handle pretty much any fruit, veggie or leaf. 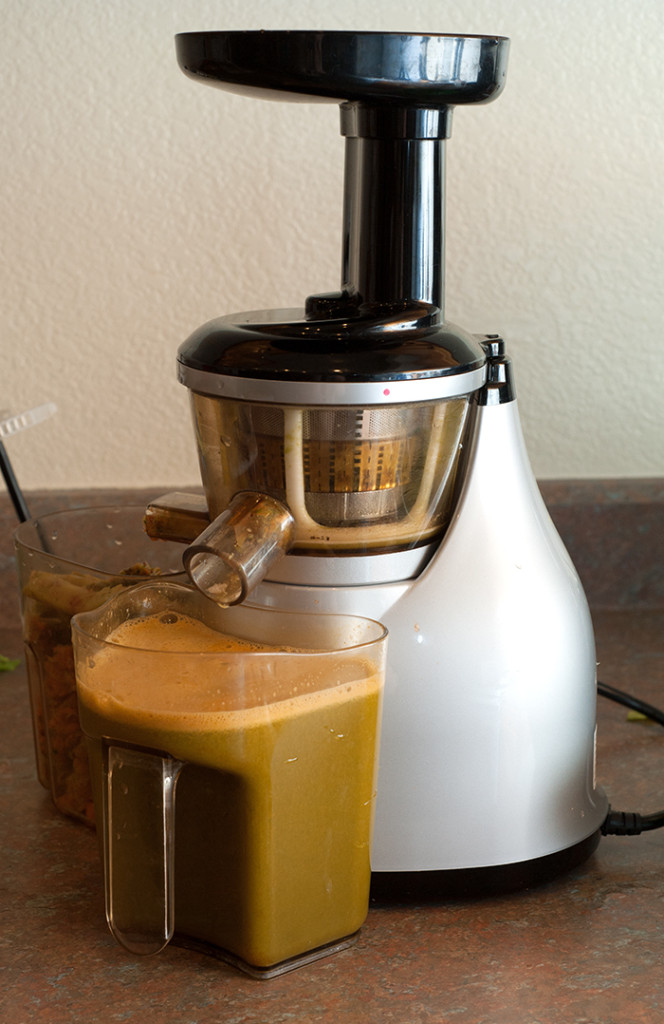 Sometimes the outlet clogs up when I juice celery, even when it’s chopped into tiny pieces, and even when I intersperse it with apples and carrot chunks.  The pulp is very dry, though – the machine really extracts most of the juice.  If you have a composter, you can dump all of the pulp in there to feel less like you’re wasting huge amounts of organic produce. 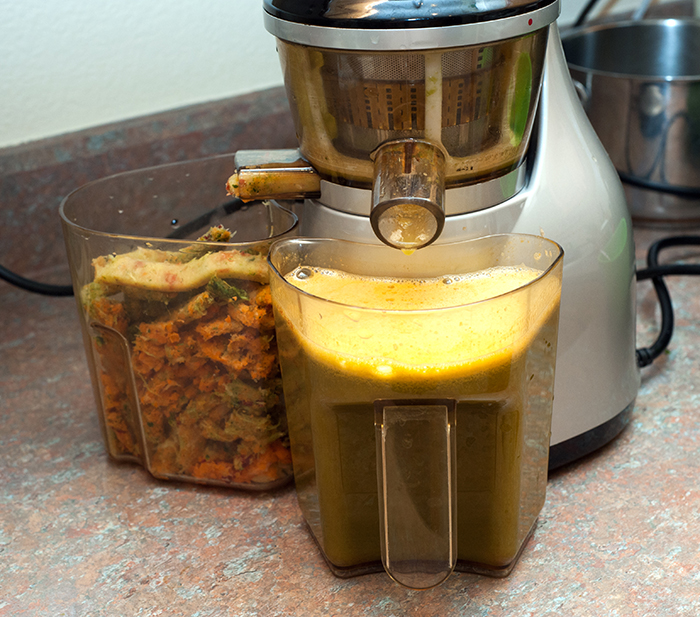 I always get organic veggies for the juice, especially the celery, which is one of the most heavily pesticided vegetables when grown conventionally.  It’s expensive, but it’s worth it to have a healthy juice full of organic nutrients.

I don’t use these juices as meal replacements, but rather as healthy snacks. I often make one as a recovery drink after Cross-Fit workouts.

If you’ve done research on the web, you have probably read numerous health claims for various veggies and fruits.  Some of these are backed up by scientific studies, although the studies are often animal studies. Human studies may be  small and don’t always contain statistically significant samples sizes, and may not have been repeated.  Some of them seem to consist of  “myth” or wisdom passed down. I’m not knocking that — many times health knowledge and wisdom is contained in a culture and passed down by word of mouth from generation to generation. But I just want to caution you (as if you didn’t already know!) to be careful when reading health claims for anything on the web.

However, there have been some research as well as anecdotal reports that celery and beet juice can both lower blood pressure; that celery and cucumber act as diuretics; that all of these veggies have beneficial antioxidants and nutrients.

I’ve owned other types of juicers in the past, such as the Jack LaLanne juicer. This one is a lot cheaper than the Omega, and it works FAST – you don’t need to chop the veggies as small, and the juicer works quickly.  It can’t handle wheat grass, though, and I used to have problems when I fed in spinach as the juicer got older. Even if I did a few spinach leaves and then some hard stuff like carrots or apples, the pulp would become unbalanced in the juicer and it would start screaming and bouncing on the countertop. Then I’d have to turn it off, open it up, clean it out, and start over.  However, it is a great juicer and worked like a powerhouse for a long time before it finally gave out on me.

If you’re having a hard time choosing which type of juicer you want, here are the things I’d focus on:

-If cost is the MAIN factor, go with a centrifugal juicer, like the Jack LaLanne. It’s a great juicer, handles most fruits and veggies (as long as you’re careful how you feed them in), and lasts a long time.  It’s not the best at leaves, but it does do them fairly well– just be prepared to open and rebalance the juicer from time to time, especially as it gets older.

-If you absolutely NEED to have the capability of handling wheat grass and all other leafy things, go with a masticating juicer, or slow juicer.  These juicers will be more expensive than the centrifugal ones, but they often come with a multi-year warranty. The manufacturer claims that the juices are healthier, although I don’t know if this has been independently verified.

Of course you can make any kind of juice you like!  Adding the apple and carrot does make the juice sweet, and it might be TOO much sugar for you, especially if you’re on a strict Paleo diet.  In that case, you can go with cucumbers, celery, kale, chard, spinach, wheatgrass, parsley, etc — anything that works.

Some studies have cautioned against drinking too much raw spinach and chard juice, saying that it contains high amounts of oxalic acid which can contribute to a variety of health issues if over-consumed.  I don’t know how much “too much” would be, but I rotate spinach in and out of the juice, and usually eat my spinach cooked (which breaks down the oxalic acid that’s in it).  You’ll have to do some reading, and make some juices, and figure out what works for you.

I love my Mean Greens (sometimes I call them Khaki Bastards, since they tend to have more of an olive/fatigue color).  Some people at MIC think the Mean Green tastes like “ass” (CH) because of the huge amount of celery in it, and I think my sisters and brother in law would agree with this. However, *I* say that the butt-load of healthy veggies in there just makes it extra wonderful.

Try one and see! 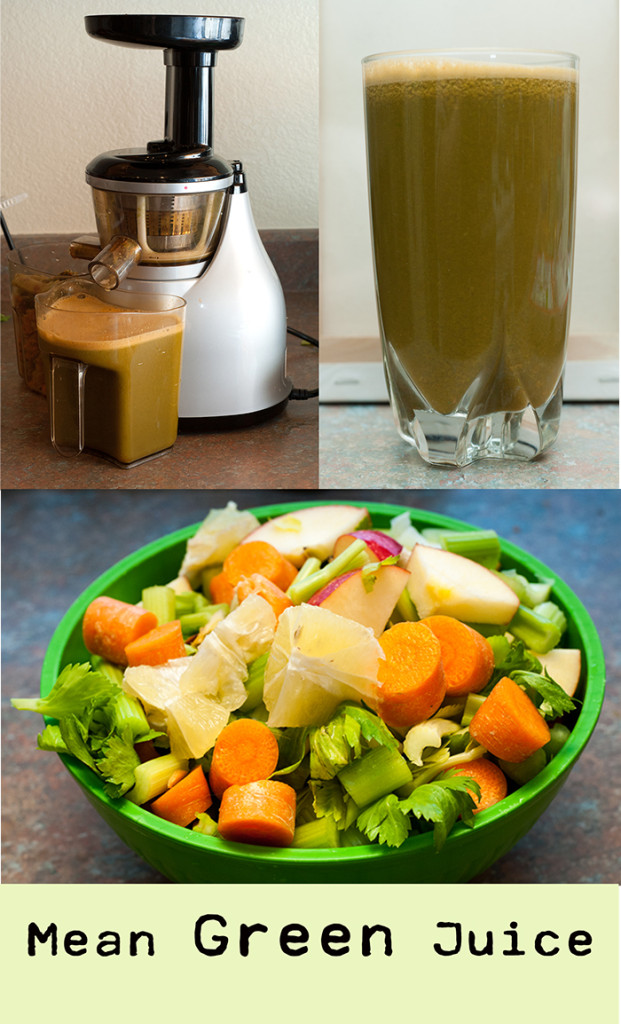 P.S. – If you want to come over for a Juice-Date, just let me know! I’d be happy to whip up a batch of Mean Green and coffee, and we can discuss politics/literature/cross-fit/bad jokes/etc.