I love hearing about how my friends are nice to their families and to strangers; it makes my heart happy to hear about people sharing goodwill and generosity around the world.

To me, it seems that no act of generosity is too little, and no act of kindness is invisible — every time we do something kind, I think we’re increasing positive energy in the people around us, and then they will eventually inspire themselves or another to more kindness, like a chain reaction of kindness. I’m not saying that by doing this we can end war, or anything — but it seems like weaving ourselves together in a bind of kindness strengthens  a necessary chain-link in the armor that protects us all as we walk through daily life, trying to survive.

One example is “paying it forward” in the Starbucks line. One day, I was idly waiting in the long line, frustrated with the wait; when I got to the pickup window, the clerk told me I owed nothing. The car in front of me had paid, she explained, for my coffee, AND left her a $10 tip. She was glowing. She said that it happens about once a week that someone pays it forward like that, and when it DOES happen, everyone in the store gets excited. The $10 tip was extraordinary, she added – the paying it forward didn’t usually include that. (She also added that the guy was “hot”, which might have accounted for part of the glow.)

It made me think about giving and kindness, and a few days later I paid for the Starbucks for the person behind me, hoping to leave them with the warm feeling of care and happiness that I’d received myself.  (I even left a big tip!) 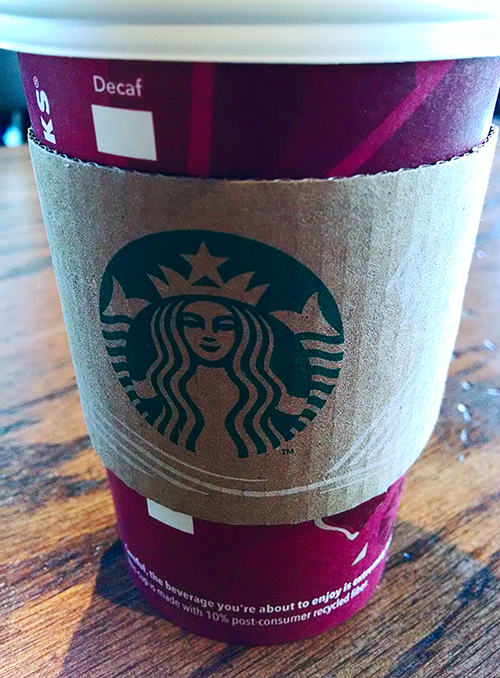 I’ve never been super generous, I suppose, but neither have I been super stingy. In college I would routinely buy a sandwich and coffee for the homeless man who hung out in winter outside the local deli across 116th St.  I always gave change to people who asked, if I had it.  Sometimes when I got older I donated to the United Way at work, and I always dropped my old clothes off at Goodwill. I volunteered off and on at a soup kitchen in high school. I generally donate to charities and causes that my friends share on Facebook.

But I’m not nearly as generous as I COULD be; it’s possible that I could help out more without significantly eroding the material quality of my own cushy life.  And so these little generous offers from strangers — whether it’s someone waving me in during bad traffic, someone getting my coffee, or someone just holding the door and smiling — these little encounters remind and encourage me to pay it forward myself by holding doors and letting people in and giving money to those who need it.

The other day, I was having lunch with my friend at the Hong Kong Buffet, when I noticed a remarkable pair of people sitting a few booths away. Their table was completely full of plates of food -  each man had 5 plates in play, and a stack of 4-5 finished plates. They were eating quickly. Both were wearing the unmistakable garb of homeless men; their pants were lined with unbending ridges of dirt; their shoes had loose soles, and each was wearing several dirty shirts. One man was rocking gently and talking, but it was to himself, as the other man was tilted away from him and shoveling food into his mouth while gazing at a distant point across the room.

A few patrons took the time to wrinkle their noses in disgust and make a point of walking FAR away from the homeless booth as they passed by, as if the men were radiating poison, then they’d glance meaningfully at the hostess station and back at the men, as if silently saying, “What the hell? What are they doing here?”

I was still mulling over my free Starbucks experience, and I had a different plan. I excused myself and went to the hostess station with a good idea, but started feeling awkward as I started talking.

“Excuse me?” I said.  “Those guys in that booth? I was wondering…are they, homeless, at all? Do you think?”

The woman sighed as if she were tired of the question. “I don’t know for sure,” she said, “and I think they’ll be done soon, so please –”

The woman stared at me. “You want to pay for their meal?”

Another hostess approached, interested.  “If you want to pay for them, I should let you know that they came in with another person, a woman, but she’s sitting by herself in that booth across from them. They’re not sitting together, but they came in together.”

“Well, I guess I’ll pay for her too,” I said. “But you don’t need to, ah, I mean, I don’t necessarily want them to know if was from me. Maybe just say that someone wanted to pay for them? I don’t want them to feel weird, like they have to thank me or anything.”

I handed over my credit card and paid, and sat back down with my friend and my meal.

The waitress immediately went over and bent down to tell the men something. They all looked at me and pointed. I could tell that she was definitely telling them who had paid.

A moment later the calmer and taller man approached. “I heard that you paid for my meal,” he said, looking at me with eyes that were blue and clear, even though his face was lined and worn.  “I wanted to say thanks.”

“You’re welcome,” I said, looking down, not sure what to say.

The man bent down and hugged me. He held my hands in his hands, and then hugged me again for a long time.  “Thank you,” he said, before walking back to his booth. The other man called out, “Yes, thank you.”  I felt simultaneously happy and horrified in case weird homeless germs were getting onto me. I understand this is probably awful, but it’s true, and I’m trying to be honest here.  Later, in the car, I smeared sanitizer on my arms up to my elbows. (Sorry! Can’t help myself!)

My friend was wildly curious and wanted to know what was going on, so I told her, and as I explained, a woman slid out of her bench and came over; it was the woman who had walked in with the two men.

“You paid for all our meals,” she said to me in a statement.

“Well,” the woman said, “That man there is my son, the one talking to himself. And I want to thank you for paying for our meals. My son is not well. He is not right in the head, you know. It’s from all the drugs when he was younger. And he won’t live at home, God knows I used to try keep him there, but he always runs out. He likes living on the street, or least wise, that’s where he always goes back to.  So I try to find him and bring him to lunch when I can, when he’s interested.  And I save up and bought him a mattress, so at least he has a place to sleep in the dump where he crashes.  I can’t give him money, because I don’t have much, and he isn’t going to buy food. He’s going to get more drugs. And I can’t sit with him, because he starts talking crazy and then we can’t eat here no more. But I do what I can with what I have.”

She added, “They won’t take him at the hospital, you know. They say he’s well enough and that he don’t qualify for free help, or for the mental help, you know. But he’s not right. He can’t work or nothing. He can’t barely take care of himself. I have to buy him adult diapers when I save up enough money for it. I buy them in bulk and drop them at his mattress for him. At least what I can.”

She was wearing a clean work dress and looked extremely tired out.  She offered to pay me back for her meal, and I said no, that I wanted to treat them.

The waitress boxed up to-go boxes for the men, even though they don’t normally do it at the buffet, and eventually the men  left, with the thinner man still talking to himself. A few minutes later the mother wiped her eyes and left too.

And I was glad I’d taken the time to do that, and I resolved to do more nice things, even little things, to make the world easier for someone,  if even for a split second.

So if my daughter and I see a person begging for money at the freeway exit, I always stop and give them some.  Twice we’ve driven to In-N-Out Burger to buy a meal for a homeless person with a sign at the roadside.  I like to think that she’s learning to be kind too; learning that although hard work usually begets success, that unlucky people are not necessarily lazy; that bad luck strikes like lightning that nobody expects, and it’s ALWAYS good to help someone, even (or especially) if they don’t help themselves.  I don’t know if karma really exists, but I DO believe that doing good things must  be good for the world. 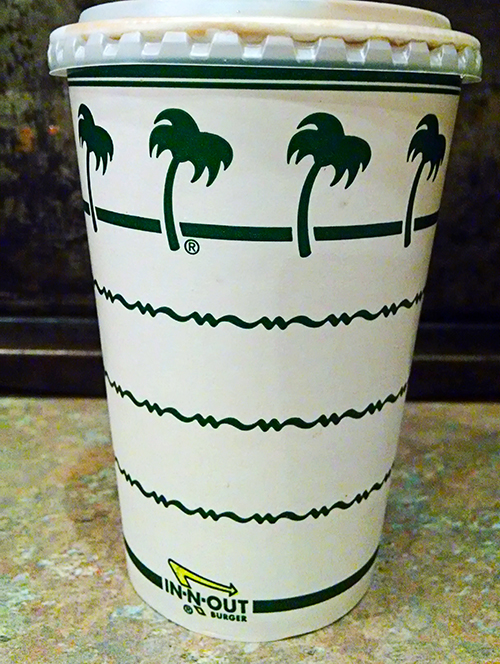 I’m not telling this story to get pats on the back, and I don’t think I’m some suburban Mother Theresa. Like I said before, even when I *do* do nice things, I feel guilty that I’m not doing enough.  But I know that my family and many friends and acquaintances have a giving spirit, and I know that if every person who reads this blog does one nice thing for another person, that’s some fresh nice new things happening in the world.

If you’re a like-minded person, I encourage you to do something nice today or soon, no matter how small it is.  The warmth of being let into an unfriendly traffic merge can last for an hour.  The joy of receiving a free Starbucks can inspire a person to give something even bigger and better to a stranger. And buying a meal for someone might be the easiest and most fulfilling way to show gratitude this holiday season, when so many of us have so much.

Here are a few more quotes on generosity that I like:

No act of kindness, no matter how small, is ever wasted.
— Aesop, Greek fabulist (fl. 6th century B.C., possibly legendary)

There are two ways of spreading light: to be the candle or the mirror that reflects it.
— Edith Wharton, American novelist (1862-1937)

Do your little bit of good where you are; it’s those little bits of good put together that overwhelm the world.
— The Most Rev. Dr. Desmond Tutu, first black South African Anglican Archbishop 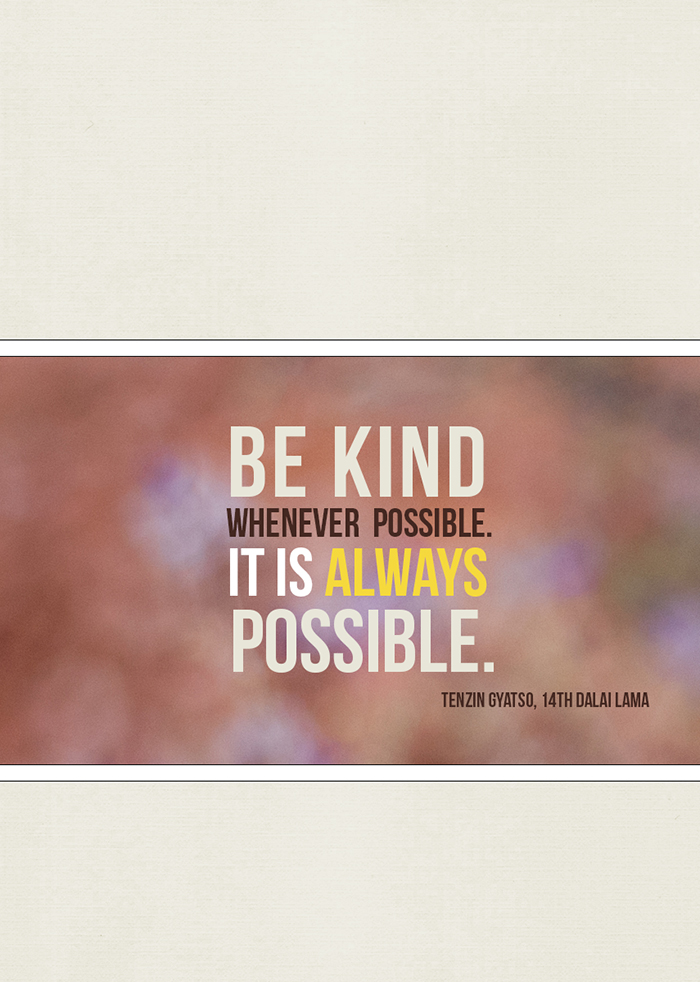 3 thoughts on “Thanksgiving and Paying It Forward”