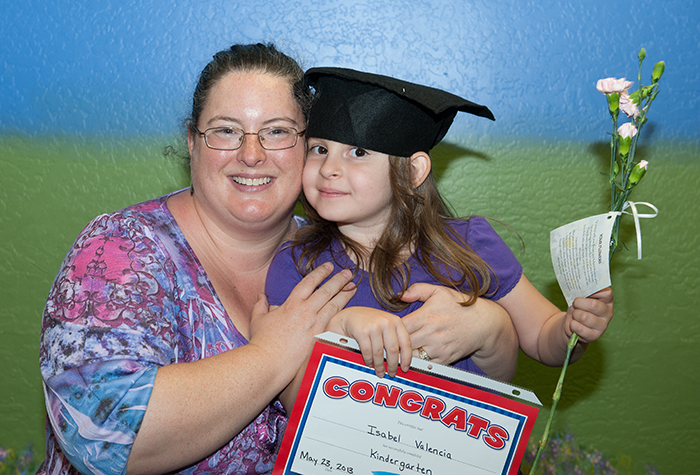 My daughter graduated from kindergarten today, and there was a song performance and some little dance-like routines.  It was probably all super-cute, although I have no way of knowing this for sure, because:  A) My  line of sight was blocked by a seething mass of outstretched arms and cameras of all styles and kinds and varieties, as well as many asses of all kinds and varieties, and B) I wasn’t sure if I was on a trading floor or at a children’s ceremony.

One of the first things the kindergarten teacher told us, in a very nice and polite voice was, “Welcome, Parents! Please remain seated during the ceremony so that everyone can see. If you need to get a picture, please stand at the back of the room! And please, do not stand on top of the folding chairs.”

As soon as she stepped away from the mike, parents immediately stood up en masse and started elbow-grappling for position, and some of them in the back STOOD ON THEIR FOLDING chairs to get a better view.

As the kids filed in, wearing caps and searching the audience for their parents and waving, the audience got more intense.  People started pushing their way to the front and standing in front of the first aisle, running into the “off limits” area where the children were walking, and squeezing un-apologetically into other people’s aisles (like mine) to stand in front of anyone they felt like (including me) in order to get a better shot with their video camera. Which is how I got to become intimate, so to speak, with several asses.

One lady sat down absently in my lap, so absorbed in her videotaping that she forgot, apparently, that she had scooted into a different aisle and was not actually standing in front of her OWN seat. She did not say anything about this faux pas; just got up, gave ME a “look”, like, “What the hell are you doing there in MY seat?” and went into another aisle to film.

After a few minutes, I suddenly smelled Ban roll-on. There was a male armpit at the side of my face, just a few inches away, and a camera in front of my face. So even though I could not see my daughter on the risers, I could now watch her through this man’s little Camcorder screen as I felt his warm breath on my neck.  It was a special moment, I tell you!  I had to say, “Excuse me?” to him several times before he grunted and moved his body and arm a few inches to the right, at least giving me some breathing room.

Amado and I laughed together about the man who ran up – so eager to film his own child receiving a diploma – that he started blocking the pathway for kids to walk up. And as soon as he did it, several other people did it (including my friend the Asslady), until the teacher finally had to say something to make them move.

It was crazy, though. People! This is kindergarten!  I had been expected some kind of filmzilla behavior, but this was beyond what I’d imagined. It made me laugh and feel depressed at the same time.

As a photographer, I love capturing moments, and I love recoding special activities. But all of these dozens of parents were so intent on filming from the best angle, and so completely enthralled in their devices, that they were not really present. They were watching, but not watching — they were seeing their child not in front of their eyes, but through a small digital screen.  The complete zeal that engulfed the room made me feel melancholy; these moments that we try so hard to capture are so fleeting, and it felt suffocating to be around all of the filmers who were in the process of missing the very thing they were trying to preserve forever.

So instead of throwing my elbows into the mix and frantically pushing for territory, I craned my neck far to the right so I could see Isabel through a gap in the asses and arms and cameras. I could see her small face. She was solemn, although at time she turned to the girl next to her and gave a small giggle and jumped up and down slightly. She twisted her hair around her finger. She spotted me and Amado and waved, then immediately pulled her small hand in, unsure if she was supposed to wave or not. She smiled at us. She tapped her feet. I could see her little mouth open very wide as she sang her favorite songs. Her hands were plump and sweet, twirling around, as she did the “moves” she’d practiced for the songs.

When it was her turn to accept her diploma, I could not see her at all. But I watched her step back onto her spot on the riser, happily holding her diploma in one hand, and she made eye contact with me and Amado again, and she smiled. She couldn’t have done that — shared the smile with me — if I’d been glued behind a tiny screen, watching her through a digital filter. It was her and me, right there. And I loved it. 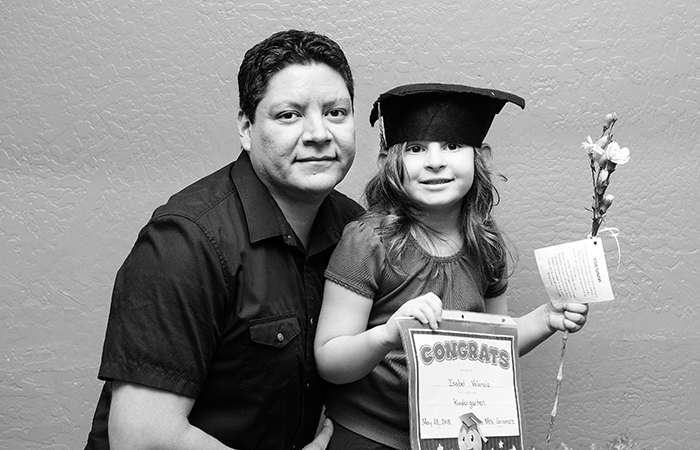