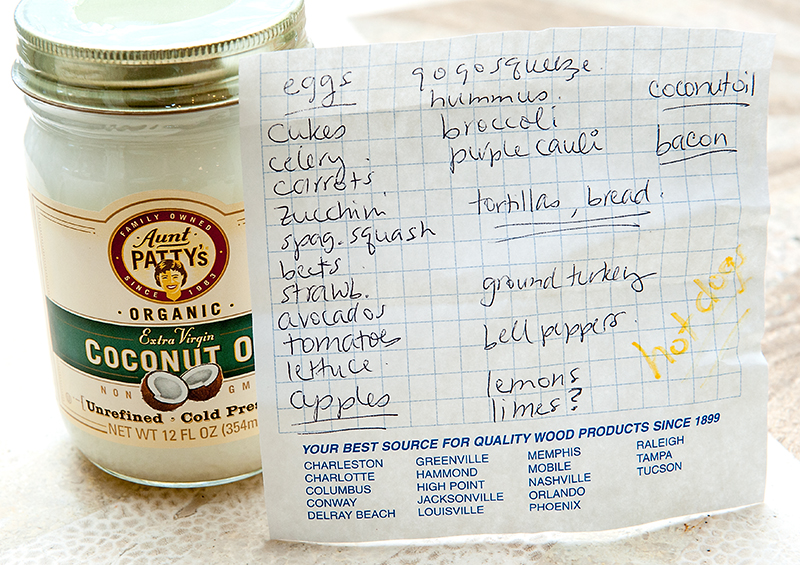 “Sure,” I said, weary from telling many, many versions of made-up Ramona and Beezus stories to Isabel, most of them about Ramona trying to sneak onto the movie set and play herself instead of letting child actress Joey King do it.  “On our way to Whole Foods!”

I had a list, and I leaned my elbows onto the back of a chair and stretched my calves while I tried to memorize it.

“Mama, what are you DOING?” asked Isabel.

“I’m trying to remember everything on this list,” I explained.

“But why, Mama?” Isabel thought this was silly. “Why don’t you just bring the list with, and read it to see what you need?”

“Just to see if I can.  To improve my memory.  OK, Listen.  I’m going to make up a story about all of these things to see if I can lock them into my mind. I”m going to imagine this happening like a little movie. Here we go.”

I thoughtfully paused, then said, “OK!  Imagine some  hot dogs with legs. They are walking, all straight and tall, with thin little arms and legs. They are wearing gym shoes. OK? And they’re pulling…..sleds…made of bacon. Yes, bacon sleds! And riding on the sleds are turkeys who are going ‘GOBBLE BOGGLE’ and juggling purple cauliflowers and broccolis.”

“Yes, I know,” I agreed happily. “That will make me remember it better.”

“Ok. So NOW, the hotdogs arrive at the swimming pool. Only it’s made of tortillas, and it’s filled with raw eggs instead of water. The hot dogs don’t want to get a sunburn, so they oil up with coconut oil and Go-Go Squeeze.  They’re really lathering in into their skin, getting all oily. Got that?

“Now, some friends come. I’m calling them the ‘Four Tall-ees” because they’re tall. Celery, cucumbers, zucchinis, and carrots. There’s 4 of them, so they’re dancing in, in a square shape. Like this.” I demonstrated a cha-cha like move.

“And NOW, they are going to go bowling, and each of them has a round thing.  They are using tomatoes, apples, beets, and avocados.  And they’re wearing strawberry hats on their heads!  And then they hop around in little hoppers made of bell peppers.

“And some little limes and lemons come in on tiny yellow legs, singing.  They are wearing shawls made of lettuce so they can fly. Super-LEMON! Whoo hoo! And then they jump on trampolines made of bread, and put on underpants made of pepperoni.

“Oh, and I can’t forget the hummus. On the way, the hot dogs pull the bacon sleds through a HUGE puddle of hummus, but it look like poop. Mud poop. BRRRRTTTTT.” (I made a fart sound.)

“I know!” I said, grinning back with pleasure. “It’s easier to remember when it’s gross. But just think, I can just say this little story to myself in the store, and that way I will remember EVERY thing on that list.”

Isabel was very quiet for a moment, then she spoke carefully.  “Mama, I don’t think you should say that story out loud in the store at all, ok?  I really don’t want you to.”

“Why?” I asked innocently. “Do you think it might be…embarrassing?” ( She’s only 6 and she’s already asking me to change? Yikes.)

In the car, I was forced to tell yet ANOTHER story about Ramona. Although I love the Ramona books, it gets tiring to be sort of on-call to make up Ramona stories at the drop of a hat every time your daughter wants one. VERY tiring.  Sometimes I said I couldn’t tell the story because I was focusing on driving.  Other times I said that I didn’t have story yet; my brain was still growing one slowly, like an apple maturing on a tree, or a chrysalis turning into a butterfly. Isabel asked many times  if the apple was ready yet. I said no, not yet, but soon.

When we got to the store, I was eager to test my memory story.  I headed right for produce. “The 4 Tallees,” I told Isabel, “bowling!” and we picked out all the right fruits and veggies. We remembered lemons and limes.

At the meat counter, I spoke out loud to Isabel.  “Hot dogs pulling bacon sleds with turkey on top. And don’t forget the pepperoni underpants. “It’s a Meat Parade!” I said in a song-ish way.  I was happy with my memory thus far.

Isabel giggled. A lady next to me, a tall elegant lady with white curls and a pearl necklace, made a sort of frown and muttered something to herself. It sounded like, “Oh My Lord. Seriously?”

Apparently she was not the type to appreciate a Meat Parade, or edible garlic-scented undergarments.  But the man behind the counter approved. “Now that sounds like a sweet setup,” he commented.

“Damn straight!” commented another customer, who was very hip and cool. I could tell he was hip and cool because:

“Oh, thanks!” I blushed.  I was so excited to receive such lovely feedback.  “It’s a new memory technique,” I explained.  “New to me, anyway.  You make up a story about all the things you need to remember, and that way you don’t need to write it down.”

Partner murmured to toe-shoes, “I’d like to see YOU in some pepperoni underpants, Honey,” and then something quieter that I couldn’t quite hear (even though I tried), and then they both giggled  before wandering over to Cheese.

Isabel whispered to me, “Did he say a bad word, Mama? You know, DAMN?”

“Oh, no,” I said quickly. “He probably meant, like, a beaver dam. He was thinking about beavers, and how they could probably build an awesome, totally straight dam made of meat. Like a dam to block water, you know?”

To illustrate, I made some noises that seemed beaverish: ‘Raaaahhh!  Arrrgarrgarrgarr. Eeeekkkkjurkurkurkur.  Grrrrrrrrrrrrrrrrreep.” And to seem further beaverish, I waved my arms behind me like a tail splashing the water, and hopped up and down.  I put a lot of effort into the beaver routine.

The pearl lady  grimaced and pointedly moved a few steps further from me. Clearly she was as unimpressed with my Beaver Impression as she was with my Meat Parade. Maybe she thought I was rabid.

Her loss, I thought darkly, and in my food movie, made the hotdogs push her into the egg pool and then take her pearl necklace and act out a scene from Fifty Shades of Gray where the boy hotdog takes the pearls over to the girl hotdog and – and no, never mind, because although the memory book said that the more explicit or gross a memory is, the stickier it is, I REALLY didn’t want to see her pearls doing that, and OH NO. Too late!  The pearls were locked into my memory in a most memorable way, and they were not even on my list of things to buy! Shit!

Isabel was tugging at my hand. “Mama, did we get hot dogs yet?”

Pearl necklace. Hot dogs. “Not yet, Sweetie,” I said, and we walked over to get them.

Later on, we tried some salami samples at the meat counter. They were really gross, and Isabel whined for water (honesty, I felt like barfing too), and then I was trying to run through the story in my head, but it was hard with a small girl complaining and tugging.

“Just let me grab the poop hummus!” I called to Isabel, and I grabbed my favorite flavor, buffalo, from the rack.

And of course, Pearl Lady was RIGHT THERE hearing me call it poop hummus.  I had to work hard to keep from laughing. The look on her snooty face was priceless, so I innocently repeated it loudly as I walked past her:  “Poop hummus! Poop hummus!” It felt great to say it loudly like that. “Poop hummus!” I repeated, and then said it again.

“Poop Hummus!”    I practically screamed at her. This time she moved away very quickly indeed.  I made another noise, just for fun, a noise that might be uttered by a rabid beaver. “RRRRRRRik -ik -ik ik ik ik ik ik!”

Why was she even AT Whole Foods? I wondered to myself.  She seemed like she needed a butler to shop for her, or something. Oh My Lord.

As we paid for the food, I checked the list to see how I’d done.  Yes, everything! I’d gotten…oh, no. I forgot the coconut oil. How could I have forgotten THAT? I’d really visualized the hot dogs greasing up when I first created the story. And I did remember the apple sauce, their other suntain lotion.

Unfortunately, even though I forgot the coconut oil, I still can remember Claudia Schiffer in the cottage cheese. (Confused? Read my earlier story on memory here.) Maybe next time I’ll have to imagine Ms. S. rubbing the coconut oil all over herself, or better yet,  I’ll imagine Mr. Christian Gray rubbing coconut oil on himself.

And if I encounter Mean Pearl Lady again, I won’t shout “Poop Hummus!” at her. Instead,  I’ll just  be forthright and tell her, “Hey! Don’t you rain on my Meat Parade!”